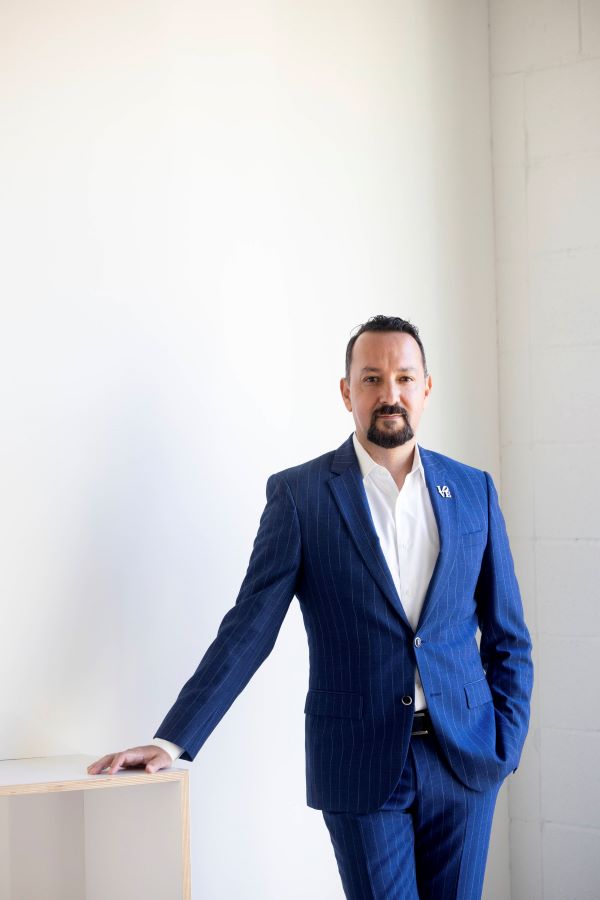 The project has been recognized as an innovative idea that can positively impact the region’s quality of life.

Carlos Gonzalez-Jaime, a seasoned consultant, art advisor and business executive, will lead the Texas coalition as it transforms the former Ku Klux Klan Klavern No. 101 Auditorium in Fort Worth into The Fred Rouse Center for Arts and Community Healing. The Center will honor the life and memory of Mr. Fred Rouse, a Black butcher who was lynched by a white mob in 1921.

Gonzalez-Jaime has been working with nonprofit and cultural organizations since 2012, and his interests lie in the intersection of arts, culture, and social impact. As the first Executive Director of the Latino Arts Project in Dallas, Gonzalez-Jaime helped design the institutional mission and vision, based around the understanding of Latin and Latin American art, history, and culture.

He also led the architectural renovation project, secured significant funding for the organization, and developed the exhibition and activities programs. His work included curating the exhibition Betsabeé Romero: An Altar in Their Memory, which paid homage to those killed by gun violence and in the brutal journeys of migration.

Transform 1012 was founded by a pluri-cultural, shared leadership collective of eight local organizations: DNAWORKS, LGBTQ SAVES, Opal Lee Foundation, SOL Ballet Folklórico, Tarrant County Coalition for Peace and Justice, The Welman Project, Window to Your World and the 1012 Youth Council. This year, the founding organizations were joined by Fred Rouse, III, representing The Fred Rouse Foundation and the Rouse family. The participating entities have unique missions and goals, coalescing around a shared vision for the former Klan building, which was acquired in December 2021.

When the Ku Klux Klan Auditorium, located at 1012 N. Main Street, opened in 1924, Fort Worth had one of the largest KKK memberships in the United States and the building was the KKK’s headquarters in Texas. The brick behemoth was designed and located to intimidate Northside Black, Hispanic, and immigrant residents returning home from the city center.

Adaptive reuse plans for the building include transforming the space into a vibrant cultural hub with state-of-the-art performance and rehearsal spaces, arts training and programming, services for underserved and LGBTQ+ youth, exhibit spaces dedicated to social justice and civil rights, as well as a makerspace and tool library for local DIY classes. The facility will also include meeting spaces for racial equity and leadership workshops and community events, an outdoor urban agriculture and artisan marketplace, and affordable live/work spaces for artists- and entrepreneurs-in-residence.

The project has received significant funding, including $3 million from House Appropriations Community Project Funding and grants from the Ford Foundation, Mellon Foundation, National Endowment for the Arts, North Texas Community Foundation, Rainwater Charitable Foundation, and Tecovas Foundation. These funds made it possible for Transform 1012 to find and hire an executive director who represents the coalition and can take the project into the development stage.

As Executive Director, Gonzalez-Jaime will join the existing leadership structure. Ten board members collectively lead the coalition, all representing the local constituencies that have been historically targeted by the KKK for violence and economic marginalization. Gonzalez-Jaime will lead fundraising campaigns, strengthen the organizational structure, and foster community involvement in the design of The Fred Rouse Center for Arts and Community Healing.

“On behalf of the Transform 1012 Board, we are all thrilled to welcome Carlos Gonzalez-Jaime into our organization” said Daniel Banks, Board Chair of Transform 1012 and Co-Founder/Co-Director of DNAWORKS, a founding group of Transform 1012. “He understands the nuances of each coalition organization and the communities that we serve as well as the importance of community involvement in co-creating The Center’s design and programming. Carlos’ extensive experience, his passion for understanding and collaborating with people, and his approach to community building will be integral to our efforts in returning resources to the communities that were targeted by the Ku Klux Klan in North Texas. We are thrilled for him to lead our efforts in transforming the building into a space of truth, reparation, and liberation.”

As a married Gay man born in Mexico, Gonzalez-Jaime’s commitment resonates with Transform 1012’s efforts to create a space where every cultural group feels a sense of belonging, of being seen, represented, and heard.

“Transform 1012’s focus on community healing is crucial to creating a culture of progress and liberation in Fort Worth—it is a great need for the local community and the world,” said Gonzalez-Jaime. “I hope our work here can serve as a model for other transformational justice projects on a global scale.”

Transform 1012 worked with People Performance Resources (PPR), a Human Resources Consulting firm in North Texas, to find the ideal candidate for the position of Executive Director.

Gonzalez-Jaime’s appointment aligns with Transform 1012’s focus on reparative justice and returning resources to communities most affected by the KKK. He centered the work of Chicano/a/x artists, writers, and scholars across disciplines in his position as Outreach Director in The Americas Research Network and catalog editor for Xicanx: Dreamers and Changemakers. During his time as an independent consultant and art advisor, he has applied his experience in strategic planning and project management to the much-needed fundraising efforts of cultural organizations, in Mexico, the US, and Puerto Rico, including the Papalote Museo del Niño, Fondo Nacional para la Cultura y las Artes (FONCA), and Fundación Casa Wabi, among others.

“As Executive Director, my first order of business will be to listen deeply and synchronize with the individuals that make up our coalition,” said Gonzalez-Jaime. “Transform 1012’s mission of healing requires us to do the rewarding work of empathizing and building deep connections of understanding with one another. In this way, Transform 1012’s physical space will embody the acceptance, understanding, and liberation that our coalition is built on.