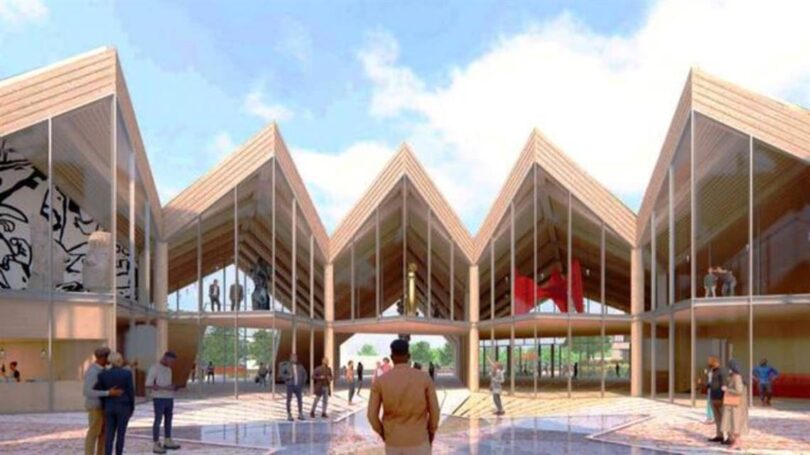 The contribution will only be made once the balance of the $70 million project is raised.

The Fort Worth City Council unanimously approved a resolution pledging $15 million to the development of the National Juneteenth Museum in the city’s Historic Southside neighborhood.

Jarred Howard, principal with Sable Brands, the project’s developer, said the museum was designed by the New York office of Denmark-based Bjarke Ingels Group. It is the same architecture firm that designed Google’s Northern California headquarters.

The design also draws on the design of the Juneteenth Star featured on the official Juneteenth flag, Howard said.

In the making for several years, the project was formally announced in December 2021. The museum will be on the second level of a two-story building. The lower level will feature a restaurant, business incubator, 250-seat amphitheater and storefronts. Three adjacent residential buildings will have 55 residences.

“Literally and figuratively, it was designed to be a beacon of light in an area that has been dark for a very long time,” said Howard, who grew up in Fort Worth’s Stop Six neighborhood. “It’s time for the revitalization of the Historic Southside. Our hope is that the city will embrace it.”

Construction could begin by year’s end or in the first quarter of 2023. A grand opening is planned for mid-2025.

Fort Worth resident and activist Opal Lee is the impetus behind the Juneteenth federal holiday, which serves as recognition of the two and a half years that enslaved Black Texans were denied notification that Abraham Lincoln had issued the Emancipation Proclamation abolishing slavery on Jan. 1, 1863.